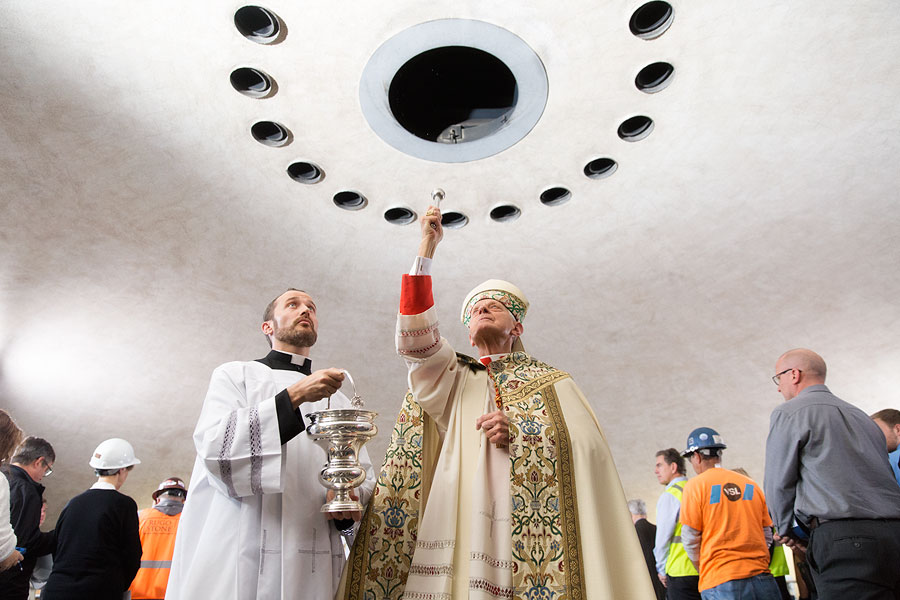 Cardinal Wuerl sprinkles holy water at the work site of the Trinity Dome at the Basilica of the National Shrine of the Immaculate Conception during a ceremony on Oct. 28. (CS Photos by Jaclyn Lippelmann)

On Oct. 28, Cardinal Donald Wuerl of Washington stood on a platform 16 stories above the main floor of the Basilica of the National Shrine of the Immaculate Conception and sprinkled holy water at the work site of the Trinity Dome, where over the next year workers will install a mosaic with more than 14 million pieces of colorful Venetian glass.

The cardinal said that the mosaic, which craftsmen are expected to begin installing in January and complete by Christmas 2017, will “be a wonder to behold and a gift, not only to our Church, but to our entire country.”

The mosaic in the basilica’s great dome will depict the Holy Trinity – God the Father, Son and Holy Spirit – and Mary as the Immaculate Conception and patroness of the United States, joined by a procession of saints from the Americas or that have a special connection to the basilica.

Cardinal Wuerl, joined by Msgr. Walter Rossi, the basilica’s rector, presided at a ceremony where he blessed the Trinity Dome site and the workers who helped build the scaffolding in preparation for the installation of the mosaic. Other guests included some of the shrine’s staff, architects, planners and donors for the project, and members of the media.